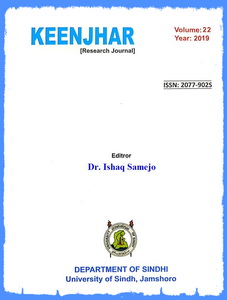 Sindhi Literature is rich in many aspects; it has a variety of genres as well as themes. If we put an eye on Sindhi Short Story, it is replete with oriental to universal themes. Among these themes, Feminism occupies a prominent place. This theme is not only dominant in the writings of Authoresses but it is also prominent in the short stories of male writers. They have not written on this issue under the influence of the feminism movement it is evergreen theme in Sindhi Literature for ages. In this research article, an attempt has been made to explore this theme in the short stories of male writers. I have tried to analyze the feelings of women as observed by the male writers in Sindhi Society. Writers has also highlighted the difficulties of female in various spheres of life irrespective of gender which are also discussed with suitable examples from the text.