Analysis of the Tradition of Opera in Subcontinent

The Manzoom drama or poetic drama is a creative artform in which dialogues are rendered in the cultural form of poetry. In the subcontinent, the folk artforms like ballad, epic storytelling, and music contain a prolonged historical legacy that is stretched over the centuries. It is pertinent to note that over a long period of time the folk artforms have continued to exist, flourish, and performed in various storytelling and performance-based linguistic cultural traditions e.g. Sanskrit, Urdu, Telgu, Sindhi, Punjabi among others. For instance, in the subcontinent and various other cultural regions, the folk performance tradition has centrally existed to form, represent and involve the ancient epics, stories of religious scriptures, classical poetry, and song and dance. Simply put, in the ancient Indian literary culture the epic stories, religious texts, and classical poetry alluded to the expression of fork artforms. In that sense, it can safely be said that the folk artforms reveal the early and ancient performing arts and in a way precedes the modern creative cultural production of the poetic drama. Against this backdrop, this paper endeavours to investigate and discuss the artform of Manzoom or poetic drama. By introducing the history of the artform and performance tradition of poetic drama in different languages in the Indian subcontinent, this research paper set outs to focus on the presence of the Manzoom or poetic drama in the Sindhi literary and performance tradition. 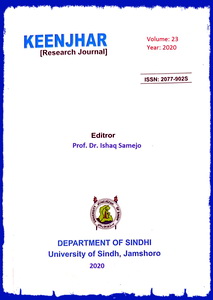