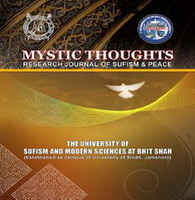 The society of Pakistan is striking by the rising turmoil, lack of peace of mind, and insecure atmosphere persisting amongst the masses. The growing competition in socio-economic spheres and increasing insecurity has created a stressed scenario for the common people.
The University of Sufism And Modern Sciences at Bhit Shah is also one of the major endeavors to disseminate awareness about Sufi practices leading to peace and harmony, and guidance on how to make it an essential part of societal practices.
This journal is being published from the platform of the University of Sufism and Modern Sciences at Bhit Shah which is the first university on Sufism in Pakistan, and the first in Asia offering a Masters Degree Program in Sufism. The journal is extensive in its scope for the contribution from the entire research community. It offers a wide range of issues especially focusing on Sufism, Peace, Conflict Resolution, current affairs, and other topics related to social sciences.
The Editorial team welcomes the writers/scholars to avail themselves the platform for contributing to issues relating to Sufism and other Socio-political themes.

Shifting Trends of Women’s Participation in Local Government in Pakistan: A Study With Special Focus on Sindh Province

Security and Peace in South Asia: A Case Study Of India and Pakistan

Concept of Love in the Poetry of Bhitai and Browning

Shah-Jo-Raag as Echo of Peace and Tolerance: A Sociological Analysis