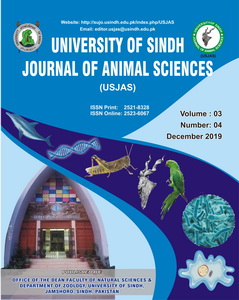 Biodiversity refers to all the members species of the five kingdoms (Monera, Prokaryote, Fungi, Plantae and Animalia) living on the Earth. It is very essential to know the actual habitat of each species and morphology for the best output of the research. To study the biodiversity regarding Ants (Hymenoptera: Formicidae) is of great importance due to their abundance, versatile functions and diversity. It is also very important due to diversity of insect fauna and known recoded species are insect then other animal. In this effort 10256 specimens were collected during the year 2018-2019 from five Districts (Tando Allahyar, Matiari, Mirpurkhas, Sanghar and Nuashahro feroze) of Sindh Province. In these five districts the mango are grown in great quantity. Five sites of each District were also selected for twice visits. The ants were collected by using different baits like chicken visceral, sweet, insects and worms. The 10256 specimens was sorted out into five sub families of ants (formicinae, Myrmicinae, Ponerinae, Pseudomyrmicinae and Dolichoderinae), six genera (Camponotus, Anochetus, Oecophylla, Meranooplus, Polyrhachis and Teteraponera) and ten species. This research carried out for the first time from Sindh, Pakistan.