The chewing lice (Phthiraptera: Insecta) were examined for their population and rate of infestation from Domestic fowl Gallus gallus Linnaeus (Phasianidae: Galliformes: Aves) from Jamshoro and Hyderabad Districts, Sindh, Pakistan during the year 2013-2014. 40 domestic fowls and were observed in four localities of Jamshoro and Hyderabad Districts, including two urban and two rural areas. During the survey, six species of chewing lice were reported from domestic fowl. Their population density on host body was recorded each month. The data were taken from four localities by random collection method. The prevalence of chewing lice species of Gallus gallus was recorded as 22.43% of Menacanthus pallidulus, 19.16% of Lipeurus tropicalis, 19.12% of Menacanthus stramineus, 16.30% of Menopon gallinae, 12.19% of Goniode dissimilis and of 10.76% of Goniocotes gallinae and Coturnix coturnix with 44.47% of Cuclotogaster cinereus, 32.64% of Menacanthus abdominalis and 22.87% of Menacanthus cornutus. 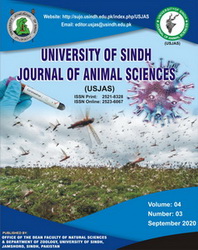