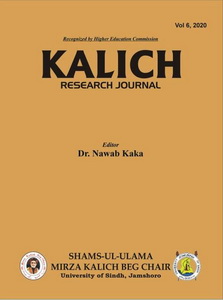 Progressive movement made its identity in the world of literature. Under the influence of this movement, literature became the real mirror of life. Literature was created for the sake of life. Human Sorrows, sufferings, Poverty, Exploitation and class destination was revealed in literature under the influence of this movement. To promote the progressivism, the role of Magazines, Journals and newspapers cannot be like this ignored. The Magazines and newspapers of Sindhi Language played a vital role in promotion of progressive movement. Especial, the contribution of Magazine “Adda”, Taqaza”, monthly Sindhi, sarsooti, Saathi Rohh Rehan, Nia Zindagi is very important in this regard. Hence the contribution of the newspapers “Ibret and Nai Sindhi” is also Significant. In this research article an attempt has been made to highlight the role of Sindhinewspapers magazines and journals in flourishing this movement.