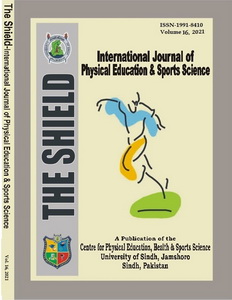 Sports are mostly considered as the most important factor to get better the cognitive skills and sustain the health of an individual. Hockey is consider as one of the most liked and ancient game. Both male and female are encouraged nationally and internationally to play hockey, all around the globe. Female players in Asian countries have lesser support to encourage and facilitate them in sports activities. It is one of the main reasons that females does not performed well as a player in the field. There is need to improve self-efficacy to improve their performance and increase confidence to participate in the sports actively. For the completion of this research work, a survey was collected from female field hockey players. They highly encouraged that self-efficacy is the most important determinant to improve their performance of female hockey players, further encouraged them to participate actively. The regression analysis concluded that there is positive and significant relationship between self-efficacy and performance of female hockey players in Pakistan. This study suggested that following the role model can also influence the self-efficacy in females, which further helps to improve their performance more effectively.